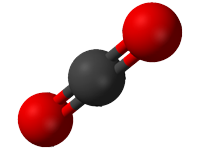 Carbon dioxide (R744) is a natural refrigerant (with a global warming potential of 1 and potential thinning of the ozone layer of 0), with very good thermodynamic properties. However, is rarely used as a refrigerant because of the very high pressure that it works with and the low temperature critical point.

Carbon dioxide is used as a refrigerant for the lower stage of a cascade refrigeration system, as an intermediate refrigerant, with a phase exchange (vapor / liquid) or trans-critical systems: heat pumps, industrial applications or air conditioning systems for cars.

The first refrigeration systems in Romania based on carbon dioxide was carried out by our specialists in 2009.
This refrigeration system is a heat pump that works in the trans-critical field to a maximum operating pressure of approximately 100 bar. After exiting the heat pump, the water temperature is 75 – 85º C.